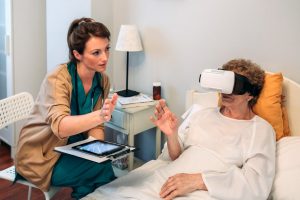 Initially, Elliott says, she was skeptical about its utility, but she quickly became a believer. She recalls a 9-year-old boy who came into the emergency department suffering from a broken arm after falling off a set of monkey bars. The child was tearing up and trying hard not to cry in front of his father. The boy was provided a VR headset with a relaxation program that showed dolphins swimming underwater. “He was so focused on the visualization we were able to put him in a splint in no time,” Elliott says. “He kept saying, ‘I see the dolphins.’ He got through it without crying.”
Language: English