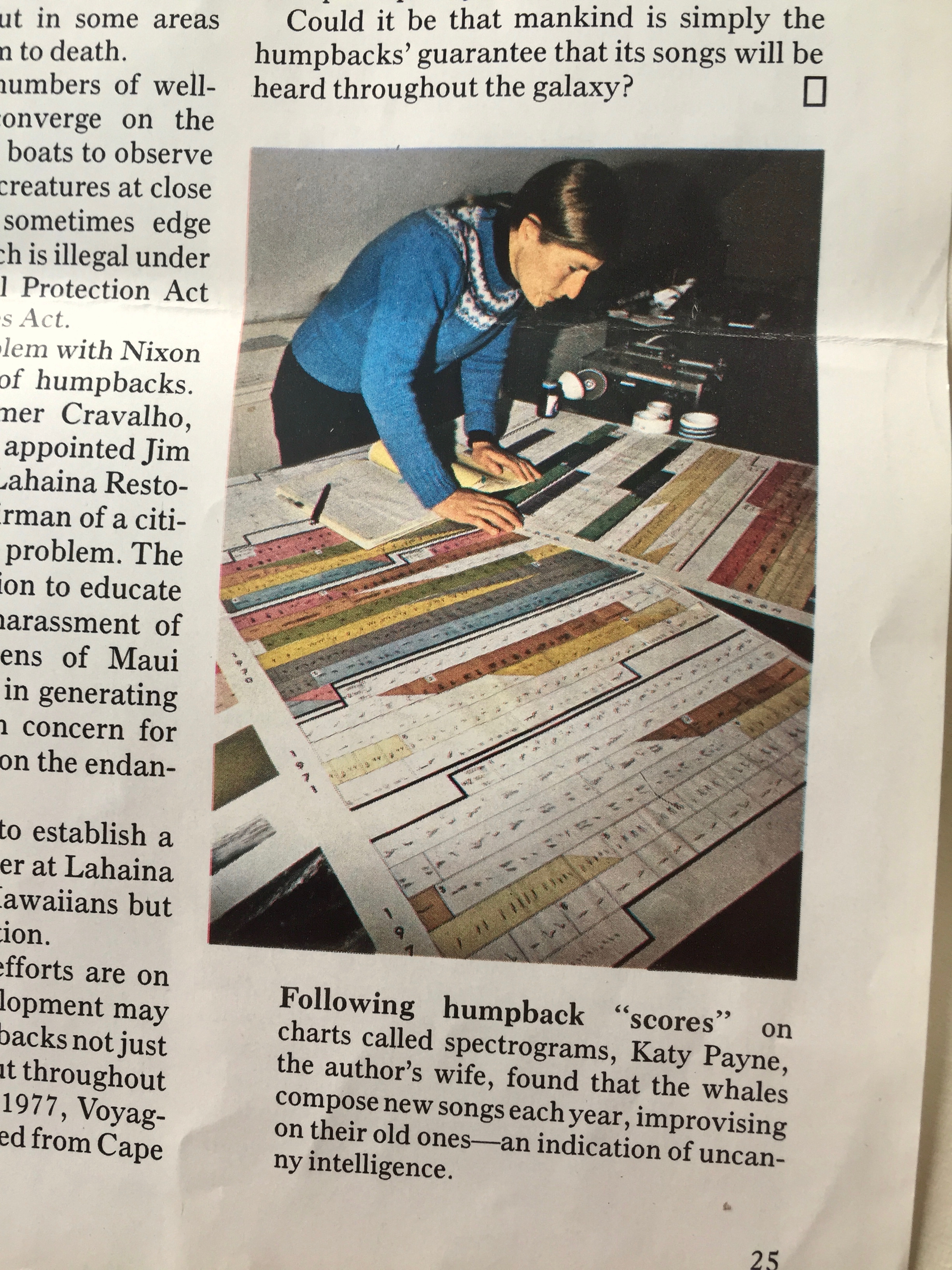 The Captain turns off the engine and lowers a hydrophone attached to a long cord into the ocean. He plugs the other end into a brightly coloured funky looking radio, serving double duty as a loudspeaker, and cranks up the volume. A party of 10, passengers and crew, Europeans, Americans and locals all gathered on this tiny vessel in the coastal waters of a Polynesian Island. Our lively conversations fall still, we concentrate on listening. The silence is only broken by the sounds of the waves gently rocking against the hull of the small boat. Some squeaks from the radio as the captain proceeds to lower the cord.

Silence. No one says a word, then suddenly, as if on cue aware of the perfect dramatic moment, a haunting moan… A sound coming from the ocean below us finds its way to the yellow and pink radio. Our native Polynesian captain, handsome and with some impressive tattoos on his legs, smiles and says; ‘we’ve got a singer!’

A large humpback whale bull floats nearby and produces these strange and highly enchanting sounds. He is calling out to the other whales: a communication that carries through the oceans, singing the song of new life, and all these other things beyond and a mystery to most humans. My mind drifts off, wondering about these things, and I have to remind myself that this is really happening, live, not a recording, in the ocean at about 200 meters distance.

What a dreamy state! I close my eyes, listening, breathing the fresh tropical sea air. After about 20 delightful minutes, the singing stops. The whale comes up to take a breath as well. Just as he breaks through the surface, we hear this very powerful exhaling sound: PFWOOSH, accompanied by a meters high spout. The drops glisten in the sun, reflecting a rainbow. A ‘rainblow’.

He takes a few more breaths, fuelling up on oxygen for his next dive, creating these colourful ‘rainblows’… every powerful exhalation through the two blowholes on the top of his head. As the created mist drifts in our direction, I prepare myself for the rather fishy smell (the only downside of being lucky enough to see a whale up close and personal). Finding oneself downwind a whale’s breath. But there is none, just fresh air. I realize that we are not on this whale’s feeding grounds. He and his family are here in the warm waters around Polynesia, migrating from Antarctica to mate and give birth to their young, fasting during the entire period. Still, the whole magical experience in its turn takes my breath away.

Songs of the Humpback Whale 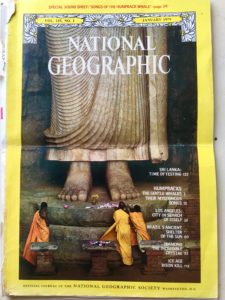 My mind drifts off again, back to January 1979. I live in Holland and return home from school as a young girl. The postman has delivered the latest issue of National Geographic magazine. I can’t read English, but it comes with a very interesting-looking little package.

In it is a so-called detachable sound sheet, which you can put on top of another vinyl record on the gramophone. I put the needle on and the living room fills with the strangest and unfamiliar vocals. The sounds are loud, long and with complex sequences and repeated phrases. I am listening to the very first recordings of the songs of the humpback whales by Katy and Roger Payne. I play it over and over again.

At the time I live in a part of the Netherlands below sea level, in a part that was claimed from the sea only a few hundred years earlier called the new land. In my imagination, I wonder how it would have looked like if the living room was still ocean and the whales would be swimming right there.

Many years later, I find myself in Tahiti, awarded by the Human Underwater Society from Papeete, and sponsored by Air Tahiti Nui to come and visit the Islands and receive the award for the whole Dolphin Swim Club VR project. Decades after listening as a child, over and over, to the first mesmerizing recordings of a humpback whale song. It’s the season of the Humpback whales, and we spend a lot of our free time at and in the Pacific Ocean around the Islands of Tahiti and Morea.

A symphony of the deep

Only days after listening in real life to this ‘symphony of the deep’ as the Payne’s called it, the experience would deepen even more. I find myself in the ocean, floating just above a whale. I can barely see him through my diving goggles, the visibility is not very clear, but a dark shape lies motionless about 20 meters below. He starts to sing…

Wow, this is not just hearing a sound with your ears. It is vibrating in my entire body. I am swimming in sound, filling up all the empty spaces between the cells that make up the biological me. Leaving no room for thoughts or any other senses. Two tones, this time, not a very complicated song. It felt more individual… like he was introducing himself to the world by calling out his name. I could not help myself by answering back, and I gave him the underwater version of my name. When I hear the funny sounds that I make I start giggling.

The whale stopped singing and I see it slowly coming up towards me on its way to the surface for air. His body becomes clearer and clearer. I can see his eye. This magnificent and large creature looks at me. What a strange and overwhelming sensation to be part of the awareness of a whale. I feel as large as the whale. Then, I shrink into a mere point in the ocean, and back again. What is this huge brain registering? What an all-encompassing presence. We break through the surface at the same time. I am watching his spouts, while he breathes. After a while he dives again, arching it’s back, revealing all the powerful muscles and, with a last elegant wave of his huge tail, he disappears in the deep. I find myself floating in the Pacific, need to switch on some senses again. I find myself snorkelling next to my beloved husband, with whom I have shared so many amazing adventures. We both heard the whale call out; I am here.

Greetings, my dear whale friend; I am here too.
Marijke Sjollema 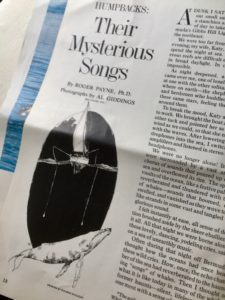 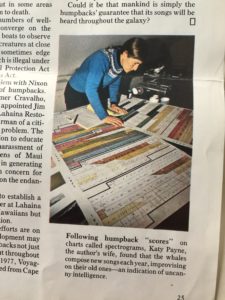 By Lysanne Zalm | In the news
Reading Time: < 1 minute 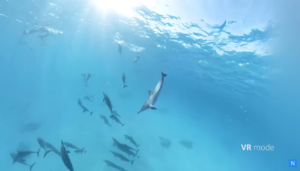 The Dutch national news shows a nice testimonial about how VR can help people suffering from psychoses or autism. After intense VR therapy sessions, patients get to relax with ‘our’ dolphins, rewarded with a virtual swim. Exciting to see how many organisations worldwide each find their beautiful uses for our virtual swimming with the dolphins’ experience.